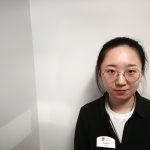 Yiming Li found her passion in working with seniors at a very young age. She explains that while she was growing up in Dalian, China, her parents were very busy people and so she spent a lot of time with her grandparents. Developing that close relationship with both sets of her grandparents made her realize that there were some serious gaps in how China is addressing aging.

“China is an aging country with many older adults,” explains Li. “Yet, the government there isn’t focused on seniors issues.”

Li landed in Canada in 2013 to study at the University of Alberta’s Department in Human Ecology, Majoring in Family Ecology and Minoring in Aging. Now in her fourth year of studies, she’s spending her practicum working with GEF Seniors Housing’s Community Supports team on the Quality of Life survey and on surveys for people transitioning into living in GEF Seniors Housing buildings. The surveys themselves aren’t particularly intensive and more rely on conversation and discovery as opposed to question and answers. The aims of the surveys are to identify keys points in the individuals that will help them live with a good quality of life while calling a GEF Seniors Housing building home and to find where key areas of services are lacking so the team can develop new programs based on the data from the surveys.

Through the surveys that Li has conducted so far, she has noticed a trend toward loneliness and isolation, especially in people with English as a second language or limited skills in English. Li saw this as an opportunity, especially with the large population of people living at Montgomery Place whose first language is Mandarin.

“Because of the language barrier, some of the people living at Montgomery Place had some frustrating experiences,” explains Li. “So when I first called to interview them, they were very hesitant to speak to me and didn’t want to participate in any of the survey work I was doing.” Even speaking Mandarin over the phone didn’t break any of the barriers these people had, Li points out. So she had to rethink her approach in trying to reach a segment of GEF Seniors Housing’s population who needed connection. With calling on the phone no longer being a viable option, Li started making regular treks to Montgomery Place during the regular coffee hour in hopes of connecting with the Mandarin speaking population face to face.

Meeting face to face proved to be a huge success for Li. She quickly noticed how much more comfortable the people were when they met with Li in person and how happy they were to talk with her about the things that would help give them a good quality of life. Through her experience working with the people living at Montgomery Place, Li wants the rest of her practicum at GEF Seniors Housing to be focused on the Chinese populations in the building and to connect with them on a level that may be lacking for them.

“A bigger goal from all of this is to have a volunteer program where people who can speak the language come in and connect with the seniors who are experiencing isolation,” explains Li. Once her practicum ends and she graduates from the University of Alberta, Li hopes to go back to China and implement much of what she has learned to the Chinese seniors industry. She explains that her country has a long way to go before even catching up to Canadian standards for aging and seniors programs and thinks that her education could make an impact on the Chinese systems.

“There is very little seniors housing available and what is available isn’t very professionally run,” says Li. “I hope to work with the seniors housing organizations in China and start to make some changes based on the things I learned while working with GEF Seniors Housing.”