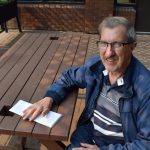 Lawrence Tomkow runs his hand along the top of one of the picnic tables outside of the Virginia Park Lodge. The outdoor space is used for gatherings, outdoor meals, and behind Tomkow is a garden with a wood laced lattice. The residents and tenants living between the four Virginia Park buildings (three apartments and one lodge) use the garden to grow flowers and their own vegetables. Tomkow’s eyes move from the picnic table and land on the wood frame around the garden’s lattice.

“I think I did a pretty good job with these,” Tomkow says, nodding with pride.

Tomkow spent the summer refinishing many of the wooden outdoor features around Virignia Park, from the picnic tables and park benches to the wood finishings around the exterior of the building. For Tomkow, not only was refinishing all of wooden outdoor wooden details something to help keep him busy over the summer, it was something he noticed early on needed to be done. Tomkow moved to Virginia Park in 2013 but was already used to lending a hand whenever he could. He explains that he used to live in a condo complex where he helped with the upkeep of the grounds. At 70 years old, he still doesn’t shy away from hard work. Before his retirement, he worked in transferring patients at the Royal Alexandra Hospital between wards. So, sanding down and re-staining some outdoor wood features is relatively simple work for Tomkow. In addition to his help with the outdoor wooden features, Tomkow also takes it upon himself to sweep up all the surrounding parking lots around Virginia Park after the winter thaw, making sure all of the sand and salt is off the concrete for his neighbours and visitors to park at.

“For a couple of hours a day, it’s not going to kill me,” Tomkow says with a laugh about all the work he does for the community he calls home. Though he doesn’t have any plans yet for what his projects will be over the winter and into next summer, he knows there’s always something he can lend a hand with around Virginia Park.

Tomkow looks back to the wood frame around the lattice, running his hand along the smooth wood finish. His laugh is distinct and contagious and he’s always willing to make himself the butt of a joke. “I had to be careful while staining the frame here,” he says with a growing grin and a chuckle. “The gardeners here would kill me if I got any stain on the plants.” Gordon Coolidge points to the peony bush at the back of Barvinok Apartments in Edmonton’s North East. He planted the bushes in the spring but knows, as the summer days are becoming fewer and fewer in number for the year, he has some work to do before the fall.

“I have to take the leaves and split them open,” he explains. “They need to breathe during the winter kill. Otherwise, they’ll suffocate and won’t regrow next spring.” Coolidge, always something of a green thumb, kept up his garden while he lived and worked out of Westlock up until 2006. He moved into Barvinok Place after he suffered a stroke during an 11 and a half hour triple by-pass surgery. He explains he was bounced between hospitals for more than six months to see different specialists before finally deciding moving into a seniors apartment was his best option.

“I moved in before GEF Seniors Housing started managing the building, and I right away noticed that the garden hadn’t been kept up,” Coolidge recalls. “I started by digging out the dry clay balls from over the years and I put in all the soil for a healthy garden.” What started off as activity to keep Coolidge busy evolved into a passion that he credits for helping keep him healthy and happy. He explains that gardening is no easy task and is a full body workout that keeps the 79 year old active.

The garden at Barvinok Apartments has helped to brighten up and add colour to the Beverly Heights neighbourhood and plenty of people in the community have taken notice. In the summer of 2017, the garden was nominated for a Front Yards in Bloom Award, which is a recognition program for outdoor space that adds to a greener and more sustainable urban environment. The Front Yards in Bloom program is run by the City of Edmonton, the Edmonton Horticultural Society, and the Canadian Union of Postal Workers. It sees postal workers and other volunteers walk through neighbourhoods to find spaces that have aesthetically pleasing gardens or growing edible fruits and vegetables. The best spaces receive a nomination card to place in their garden. The official awards will be given out on August 24, 2017, at the former Royal Alberta Museum.

“I always had neighbours coming by to take pictures and tell me that they love the garden,” Coolidge explains. “But I never expected a recognition like a Front Yards in Bloom nomination.” As he approaches 80 years old, Coolidge has no plans to ever slow down on his gardening. He walks through his garden, pointing out the weeds he pulled before adding the pots of coleus plants alternating in purple and green, and revelling in how many bees are working hard to pollinate with the help of the flowers he planted.

“You need to have something to help you get up in the morning and get you through the day,” Coolidge says. “I don’t want to sit around and get old. You’re never old until you admit it. Until then, I’ll spend all day working in the garden.”