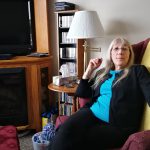 Janet was never one for napping. Shortly after moving into Canora Gardens in February, 2018, she decided to take a quick rest in the afternoon. She woke up a few hours later, realizing that this was the first long and deep nap she had taken in years.

“I told my daughter and she howled because she’s never seen me nap!” Janet says with a wide smile. “I remember waking up and thinking, ‘oh, this is what it’s like to relax.’”

Moving into Canora Gardens has changed a lot about Janet’s day-to-day life. Even in the short time she has lived in the GEF Seniors Housing building, she says she already feels more at home here than she has anywhere else in the past 20 years. Though it took some time to finally move in, Janet believes that being able to call Canora Gardens home was well worth the wait.

“I would have waited another two or three years if it meant I was living somewhere as great as this,” Janet says. “I applied even before the applications were technically open. I was approved in about four days.”

Janet saw photos from Canora Gardens before it experienced its 2012 fire and was immediately drawn to the building. She was living in another apartment building close to the city’s west-end, but wanted to be further west so she could live closer to her daughter. Janet remembers the first few interactions she had with GEF Seniors Housing staff

“You don’t get that kind of respect everywhere,” says Janet. “I felt immediately welcomed by everyone working here.”

Seeing the show suite at Canora Gardens impressed both Janet and her daughter. They were both immediately drawn to the counter space and cabinets in the kitchen. Living with celiac disease means Janet has to do a lot of her own cooking so having a spacious kitchen with full sized appliances was important.

In addition to the full kitchen, Janet and her daughter immediately noted how safe and secure Canora Gardens is. She immediately noted that all the locks in Canora Gardens are set with a fob and not with the typical key system in most older apartment buildings. She remembers back to her previous building where there were serious issues with break and enters.

“It got to the point where I was piling up chairs against my door,” explains Janet. “Now, I live with a sense of serenity. I’m actually able to sleep now because I feel so safe.” Janet’s positive spirit is seeing her already looking to make connections within her community. She’s never been one to shy away from meeting new people and is even exploring the larger neighbourhood to help keep her busy. She’s even starting to look ahead, knowing that as she ages she won’t be able to live totally on her own. Janet laughs as she points out that she already has her next GEF Seniors Housing building picked out.

“I got to see Meadowlark Place and I told my daughter, this is where I want to live next when the time comes,” says Janet. “For now, I am completely happy here. It feels like I’ve been given a new lease on life.” Ruth Belford remembers sitting at a bus stop in central Edmonton, where she’s lived almost her entire life. She explains that she looked across the street and saw two older homeless gentlemen sitting on a bench one cold winter day. It was what the two gentlemen were wearing that caught Belford’s attention.

“I looked across the street and I’m thinking, there’s two of my toques,” Belford says with a smile. “That was for me [the moment I realized] that’s where they’re supposed to go. And there they were, right across the street.”

Belford lives at Ansgar Villa where she’s a part of a knitting group that gets together a few times a week to share knitting tips, try out new patterns, and socialize with her neighbours in the building. In fact, almost every GEF Seniors Housing building has a knitting club and each year the clubs combine everything they’ve made throughout the year and donate the items to local charities. In 2016, more than 5,000 items were donated to charities across Edmonton and 2017 is shaping up to see an even bigger donation out to the charities serving the communities who need it most.

Dubbed the Great Knitting Giveaway, the knitting clubs gather together each year for a meal and to hear presentations from the charities receiving the donations. This year’s event, taking place on October 20, will feature presentations from organizations such as Operation Friendship Seniors Society, Youth Empowerment and Support Services, the Edmonton Mennonite Centre for Newcomers, Ronald McDonald House Charities, and the Mustard Seed. Item donated range from scarves and gloves for adults and kids to toques for newborns. Previous years even included knitted dolls for newly landed refugee children and nests for animals needing rehabilitation.

The event acts as a reminder to the seniors who spend the whole year knitting that their efforts are going towards something important and that their contributions are both needed and appreciated. Sitting with other knitting clubs from around GEF Seniors Housing and seeing thousands of unique knitted items from other groups helps spur creativity in the knitters and prompts them to try new things when they reconvene for their regular knitting clubs.

For Belford, attending the Great Knitting Giveaway event reinvigorates her desire to keep contributing to the communities who need the things that she and her knitting club create. She describes the excitement she feels when she goes into the event space and sees the piles of toques, mittens, scarves, and blankets all going to people who need them. “It makes you want to go home and just knit!”

A new bench was placed outside of Cathedral Close on June 29, 2017, and while this isn’t normally something to pay special attention to, this bench represents something more than simply somewhere to stop for a quick rest. As part of the City of Edmonton’s Hello, How Are You? campaign to address urban isolation and mental health, the Buddy Benches were developed by the City Lab as an open invitation to make a connection.

Edmonton Transportation Service (ETS) donated 20 brand new benches to be used as Buddy Benches all over Edmonton as a means to try and address social isolation. The idea is that people can stop and sit on the bench as a signal that they’re looking for someone to talk to. Anyone else can then join the person on the bench, ask how they are, and start a conversation. Most Buddy Benches are painted bright colours with the hashtag #SayHelloYeg to signal that this bench is meant for connections. “When the bench was being installed, a lot of the tenants were asking what it was about and after I explained the Buddy Bench program they really loved the idea,” says Colleen Simpson, Assistant Manager with Cathedral Close. “We have a couple of our own benches and a gazebo on our property, but the Buddy Bench is allowing more connection with the community, which is important for a lot of people.”

Areas being targeted for Buddy Benches include high density neighbourhoods with lots of pedestrian traffic and close to seniors residential buildings. Seniors are increasingly a population at risk for social isolation and more organizations are taking steps to try and address the isolation issues and help prevent any of the adverse health effects that follow social isolation.

“In the short time the Buddy Bench has been in front of Cathedral Close, I’ve already seen a few seniors sit on it, and these are seniors I don’t recognize,” says Simpson. “People from the community are already trying to make more connections and I’m really excited to see some of the interactions happen.”