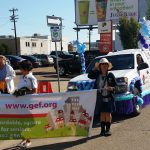 “Any chance we get to connect with the communities we operate in, we want to take advantage of it,” says GEF Seniors Housing Public Relations Manager Christopher Schieman. “The K-Days Parade allows thousands of Edmontonians and other Albertans from surrounding areas to see who we are and want to connect with us.” GEF Seniors Housing staff volunteer to put on the mascot costumes and dress up to the parade float’s theme. Schieman remembers the 2016 parade and trying to find leisure suits and retro-style prom dresses for the more than dozen volunteers who walked alongside the float.

“The Communications team spent a day digging through the racks at Value Village looking for dresses and suits,” Schieman says with a laugh. “We donated everything right back after the parade to make sure that the community members who shop at that Value Village are able to find more long term use for the clothing.”

This year, the staff volunteers in the parade will be dressing up in Canadian pride summer clothing to walk alongside the float being built to look like a car surrounded by different Canadian monuments. Schieman points out that each year, the audience members most excited to see the float always surprises him.

“The kids watching the parade love Harold and Mildred,” says Schieman. “They wave really big and yell, ‘It’s Grandma and Grandpa!’ It’s a nice reminder how important grandparents are to families and how what we do at GEF Seniors Housing helps so many people.”

Schieman always volunteers to ride shotgun in the truck pulling the float so he can snap a few pictures of the audience for social media as they drive by. He explains it’s one of his favourite events to work on over the summer and not just for the big smiles on the faces of everyone watching the parade.

“It doesn’t hurt to be out of the office on a beautiful summer morning,” jokes Schieman. “This is a great way to spread the message about the need for affordable housing for seniors. Everybody’s outside, feeling good, and ready to celebrate. We love being part of festivities like the K-Days Parade and being an important part of the Edmonton community.”