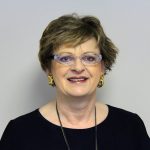 Karen Lynch was just eight years old when she “repurposed” some money she had taken from a UNICEF donation box. When her parents found out what she had done, they determined the consequence to her actions would be to volunteer at a local charity.  Her parents arranged for her to volunteer at GEF’s Meadowlark Lodge and play the piano for the residents. It is still unknown today if the real punishment was for Karen or the residents. This was the first time Karen was introduced to GEF Seniors Housing, and she has kept that memory with her ever since. Many years later Karen is still a part of the GEF Family. She has been a member of our Board of Directors since 2014 and the Board Chair since 2017.

Karen is a respected civic leader, with over 40 years of diverse experience. Her reputation for making things happen and getting things done is well known in Edmonton. Karen’s passion is creating and nurturing networks of people involved in building community leadership, which makes her a perfect fit for GEF. She has served on the boards of the Edmonton Public Library, Volunteer Canada and Alberta Ballet, and as the elected President of the Alberta Library Trustees Association. Her extensive experience in politics and her wealth of knowledge has proven to be an asset to our organization.

Being a Board Chair is no easy feat and chairing meetings is the least of what she does. “An important aspect of being the Chair is creating and shaping the agenda and conversations for meetings [to ensure the organization is always following the right path and the] board members can speak up and bring the value to the table to be able to shape what GEF does.”

“Part of my job is to help recruit new board members along with the rest of the Board. We look at our matrix to see who is retiring or leaving and then we try to encourage people to approach the City or approach us, to see if they would be suitable for the Board and if they have talents or knowledge they can share and contribute.” When reflecting back on the past five years, Karen doesn’t think the organization or the Board has changed very much.  “This is an exceptionally well led organization. What I think has changed, is the environment around us. We’ve had two complete changes in the government, both federally and provincially. We’ve had many new council members, so in that respect, the connections with the external community has changed. I think that we are starting to do a better job of reaching out to other community partners we may not have known about in the past.”

Karen has been a dynamic leader and visionary for the Board of Directors of GEF Seniors Housing. She has a vision for where we need to be as an organization and the talents and passion to help us strategically get there. Her desire throughout her time on our board has been to make GEF the best organization it can be and she will not stop driving the enhancements until we get there! Cathy Lupien stands by the bookcases in the Pleasantview Place library. The bookcases sit next to two large windows, sunlight beaming through and illuminating the books. Between the two bookcases are a TV set and s small table with puzzles for when the residents’ grandchildren come to visit. Lupien explains that the library hadn’t always been arranged like this. In fact, how it was originally arranged made it difficult for many of her neighbours to take out books.

“The bookcases used to be in the far corner,” Lupien says, point to a darker section of the library where the piano now sits. “No one could see any of the books. I moved the bookcases because I wanted them to be by the light, so people could see the books better.”

Lupien’s volunteering doesn’t end with helping Pleasantview Place’s library. Most notably, she lends a hand with the Canadian National Institute for the Blind (CNIB) with everything from fundraising to programming to even spending time with visually-impaired individuals who use CNIB’s services. Though 79-year-old Lupien’s doctors have been insisting that she slow down her volunteer efforts, her natural inclination to seek out ways that she can help others both ensures that she remains active and inspires other to find their own ways to give back. One of Lupien’s main ways of helping charities and not-for-profits is helping with casino events and bingos. It was at a bingo event seven years ago when she met one of the manager’s working with CNIB. After a conversation about everything the organization does for people who are visually impaired, Lupien didn’t wait long to start finding ways to be directly involved. It was two days later when she officially started with CNIB.

“These people are human beings and they deserve respect,” says Lupien. “[CNIB] isn’t getting a lot of the funding they should be getting and if my helping out makes sure that these people get all the help they need, then I’m happy to do it.”

Lupien isn’t a stranger to working for the benefit of the public. She previously worked with former Edmonton Mayor William Hawrelak and former Alberta Premier Peter Lougheed. Though the connection to public service is present, Lupien’s motivations for continuing to give back stem from a lot of different influences.

“I just can’t sit around all day,” she says. “There are a lot of people who need help form volunteers and I want to inspire other people to find ways they can give back too.” One person that Lupien inspired is her great-grand-niece, Nicole Philpot, who at an early age discovered a passion for five-pin bowling that eventually grew into being part of a Stettler based team that competed in a Canada-wide championship. Philpot’s grandfather (and Lupien’s nephew) Leo Cherwinski explains that Philpot discovered bowling at an early age, around three-years old.

“It didn’t take long for her to start showing a lot of skill with her bowling,” says Cherwinski. “By age seven, she was winning trophies. By ten years old, she was travelling all over the province competing.” “I want to see more young people finding things they love and working at it to become something better,” says Lupien. “Young people are the future and we need to encourage them to do things that are going to make their lives and the lives of others better.”

Lupien points out that she needs to slow down. Between her tennis elbow, her tendonitis, and a damaged Achilles tendon, her doctors urge to find new opportunities that won’t be so physically taxing on her. Though Lupien regrets that she won’t be able to move around bookcases anymore, she’s still planning out her volunteering venture.

“I think I’m going to volunteer at the Cross Cancer Institute,” Lupien says. “But not as a greeter. I had a friend who was a greeter at a department store. He hated it, quit after two days. I know I would hate that too. I’d get bored. I need to be doing something more.” For GEF Seniors Housing, the Edmonton Municipal Election started on September 12, 2017, when 25 of the candidates for City Council met with members of the Board of Directors and Seniors Management team over breakfast at McQueen Place. After CEO Raymond Swonek’s presentation provided an overview as to who GEF Seniors Housing is and how the Foundation adds value to communities, the candidates asked engaging questions and expressed their support for the Foundation’s mission.

In the weeks following the breakfast meeting, the candidates took to visiting GEF Seniors Housing’s buildings all throughout the city, totalling well over thirty formal visits through eight Wards. Some of the visits were even formatted as full panel discussions with a range of different candidates all running in the same Ward, sharing their platforms and answering questions. Through many of the meetings, there was a clear support for addressing several issues faced around seniors and social housing. As the new Edmonton City Council takes shape, GEF Seniors Housing is excited to continue its working relationship with the City of Edmonton and is looking forward to seeing what new opportunities arise from strong collaboration. Thank you to all the candidates who ran during this election for your visits to GEF Seniors Housing buildings. The conversations brought to light many of the issues seniors face every day and helped spur a lot of creative ideas to help improve the quality of life for seniors in Edmonton. Congratulations to Mayor Don Iveson on a successful campaign to be re-elected. We’re looking forward to your second term as Edmonton’s Mayor.

Congratulations to all of the incumbent City Councillors taking your seats once again for another four years in office. We’re looking forward to continuing our strong relationships in your communities.

Lastly, congratulations to the new City Councillors: Jon Dziadyk (Ward 3), Aaron Pacquette (Ward 4), Sarah Hamilton (Ward 5), and Tim Cartmell (Ward 9). We’re looking forward to working with you on new projects and helping to make sure no senior ever has to worry about where they will call home. With new capital projects moving forward such as Sakaw Terrace, Elmwood Terrace, and the redevelopment of Strathcona Place, GEF Seniors Housing knows it has allies in Edmonton’s City Council, sharing a vision of accessible and affordable housing options for everyone.

On September 12, 2017, members of the GEF Seniors Housing Board of Directors and Senior Management team met with candidates from all 12 Wards for Edmonton City Council and for the Mayoral position. The event was held at McQueen Place and hosted by GEF Seniors Housing Board Chair Karen Lynch. It featured a breakfast prepared by McQueen Place’s Chef Lynn Hunting, a presentation from CEO Raymond Swonek, and concluded with a question and answer session where the candidates shared their thoughts on seniors housing issues.

In total, 25 candidates joined GEF Seniors Housing to learn more about the Foundation’s mission and vision and why supporting affordable seniors housing options in Edmonton is so important. “All of the candidates were completely engaged with the presentation,” says Swonek. “They agreed with our principles and were ready to continue supporting both the continued operations of our current buildings and new capital projects around the city.” Swonek explains that the questions from the city council candidates mostly revolved around new capital projects. They were curious about the steps taken to start new building projects and what it would entail for a new project to be built in wards where GEF Seniors Housing currently do not have buildings. For Swonek, this line of questioning is a good sign for what’s to come.

“What these questions tell me is that they want to see more affordable seniors housing options being built,” says Swonek. “They understand the facts around seniors and social housing issues, they agree with our approach to start solving some of these issues, and they want to see us continue the work that started almost sixty years ago when GEF Seniors Housing was first established.” The candidates who attended the breakfast are in the midst of scheduling times to continue the conversation by visiting GEF Seniors Housing buildings in their wards. They will be able to connect with residents to hear about their concerns for the new City Council. In total, GEF Seniors Housing has a presence in eight of the 12 wards and candidates from all areas are working to share ideas directly with members of the community.

“We’re thrilled that so many of the candidates see eye to eye with what we’re trying to do as an organization,” says Swonek. “I’m looking forward to this election and working with the new City Council on future GEF Seniors Housing projects.”