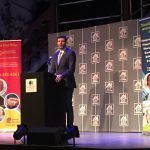 For the past nine years, GEF Seniors Housing hosts a breakfast fundraiser to help support new capital building projects in Edmonton. Though the Building for Life Breakfast Fundraiser is held annually and has been hosted by CTV’s Daryl McIntyre, every event has a different flavour that’s kept GEF Seniors Housing’s business partners and community connections returning each year. As GEF Seniors Housing CEO Raymond Swonek explains, you can never predict who will attend any of these events.

“Last year, we saw tremendous support from the Province of Alberta with five MLAs attending the event, including Minister of Seniors and Housing Lori Sigurdson and MLA for Edmonton – Centre David Shepherd who both spoke as part of the event,” says Swonek. “This year, we had the honour of hosting Mayor Don Iveson, who has continued to be a partner in our mission to provide affordable housing options to Edmonton’s senior population.”

Also in attendance at this year’s breakfast was Ward 1 City Councillor Andrew Knack, MP for Edmonton – West Kelly McCauley, MLA for Edmonton – Decore Chris Nielsen, former City Councillor and Chariman of the University of Alberta Board of Governors Michael Phair, and staff members from the Minister of Seniors and Housing Lori Sigurdson’s office. For Swonek, seeing public dignitaries from so many different levels of government attend the breakfast fundraiser shows that the issues of providing affordable housing to seniors is a very important topic.

“We’re seeing more elected officials than ever being engaged with social programs like ours and recognizing that there will be more than one million seniors in Alberta alone in the next fifteen years,” says Swonek. “We’re seeing engagement from all levels of government and a recognition that we need to act now to ensure that no senior ever has to worry about where they’re going to call home.”

In all, GEF Seniors Housing raised over $80,000 at the event. The funds raised go directly to support Sakaw Terrace, GEF Seniors Housing’s newest capital building project in the Mill Woods area of Edmonton. Swonek points out that the breakfast fundraiser came up a little short of the $100,000 goal to raise the last $450,000 needed for the project, but he remains optimistic for what Sakaw Terrace holds and what the future support for affordable seniors housing will look like.

“Construction for Sakaw Terrace started back in November of 2016, and one way or another that building will be finished,” says Swonek. “We have other fundraising opportunities coming up before the building’s winter 2018 opening date. I know we have partners fully invested in this project, wanting to see it come to life as much as we do, and we’re more determined than ever to see Sakaw Terrace become a vital part of the Mill Woods community.”