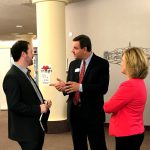 At the end of each year, I always take some time to reflect for myself. I picture where we started the year, see how far we have come over the past 12 months, and think about everything we have achieved. To say the least, 2017 has been a year of a lot of changes and growth for GEF Seniors Housing as a whole.

We have a lot to be proud of from the work done over 2017. GEF Seniors Housing is continually evolving, growing, and finding better and more creative ways to provide seniors with housing options that are friendly, affordable, and secure. Here are a few highlights from this past year.

It’s been just over a year now since Sakaw Terrace broke ground and the construction process has been going remarkably smooth. Sakaw Terrace is well on its way to being completed and opening its doors in early 2019. Most of the concrete has been poured, the structural steel has been erected, and suites are beginning to be framed.

Canora Gardens is opening its door in 2018 and we’re accepting applications for seniors to move in and call this west-end building home. We stripped the suites right down to the studs, upgraded all the mechanical and fire protection systems, and re-designed the building to better accommodate senior living.

We held our second Elmwood community consultation meeting and despite the cold wind and snowfall, we still had 90 people fill the Elmwood Community Hall and share their thoughts on the initial architectural drawings provided by Jonathan Rockliff of RPK Architects. The ideas expressed at this meeting are being brought to the planning committees for the Elmwood building project and being included in many of the conversations that will eventually result in this new seniors housing building in Edmonton’s west-end.

Our fundraising efforts saw some significant contributions over 2017. This past April, the Building for Life Breakfast Fundraiser saw more than 300 members of the community and donate more than $80,000 towards Sakaw Terrace. GEF Seniors Housing is still collecting donations to go towards new capital building projects in the City of Edmonton so that no senior ever has to worry about where they will call home.

In November, we learned that GEF Seniors Housing was once again named one of the Best Small and Medium Employers in Canada (BSME). Our receiving this distinguished honour is a direct result of a staff survey hosted by Aon Hewitt and Canadian Business magazine. We were placed in the Platinum category, the highest designation an organization can receive. It’s always exhilarating to see our name among so many other amazing organizations and knowing that the people who work with GEF Seniors Housing make such a concerted effort to keep this place somewhere amazing to work.

Thank you to everyone who makes up the GEF Seniors Housing community for another amazing year. The staff  who work with us, the seniors who call our buildings home, the like-minded organizations who we partner with, and the neighbourhoods who welcome us and know the value of affordable housing all played part in what made 2017 another amazing year.

Deepa Garbaria wrote this opening line to a poem when she moved into her new home at Grace Garden Court. The poem titled “Anxiety” outlines her struggles adjusting to both moving to Edmonton from Montreal and to moving into her new apartment.

“I didn’t like it at first,” Garbaria says with a chuckle as she points out that she moved into the building back in 2001. Needless to say, Grace Garden Court has grown to be Garbaria’s home and has become the centre of much of her poetic expression.

Garbaria discovered her love of writing poetry after she retired from working as a teacher. Originally from Nairobi in Kenya, she landed in Montreal with her husband and three children and eventually got a job teaching at the school on the Kahnawake reserve. She remembers being involved in many different arts programs with the children she taught including directing theatre productions and writing poetry. “Some of my former students would go to see my sister because she was an eye doctor,” Garbaria reminisces. “They all remembered me teaching them poetry and would still talk about it.”

As her skills in writing poetry developed, she began taking part in poetry readings throughout the city and even had a collection of poems published by a teacher named Sandra Mooney called Seeking in 2010. In 2016, she decided to submit a poem to a Canada-wide contest with the Victoria, British Columbia, based Poetry Institute of Canada. She received a fourth place prize for her poem Rossington Cottage and her poem was published in the Island Tides anthology along with the other contest winners.

For Garbaria, writing poetry in English provides a special challenge that she finds joy in overcoming. She speaks Punjabi, Hindi, Urdu (all relating back to her relatives who were originally from India), and Swahili (the main language in the African countries she grew up and worked in) along with English. “Direct translations never work right, so I sometimes struggle to find those right words I need to express what I’m feeling,” says Garbaria. “When I find the words, though, it makes me so happy. But the happiness doesn’t last long and I want to work on the next poem and keep building my self-confidence.”

The topics of Garbaria’s poems range from the spruce tree outside her apartment window to watching nature during the winter time. She even wrote a poem to commemorate former Grace Garden Court building manager Joyce Rebman after she left GEF Seniors Housing. Even at 89 years old, every one of Garbaria’s poems is another opportunity for her to grow. “I have so much in my brain and it needs to come out,” Garbaria says. “I have so much culture in my background, being Indian heritage, being a part of the British colonies, living in Africa, and now living in Canada. I have seen and experienced so much, countries changing, capitals changing, kingdoms falling, and I have so much to share.”

Garbaria’s life experiences help drive her to continue being creative. As she explains, she gravitates towards poetry because of how far it can reach and how anyone can enjoy it.

“Poetry is so universal,” Garbaria concludes. “Right from the songs and lullabies that a mother would sing to her child, poetry is in every human being.”

Ruby Gibeault has spent the past 12 years living at Porta Place apartments in Edmonton’s Beverly Heights neighbourhood. She made the choice to move out of her house near Commonwealth Stadium and was immediately drawn to the community around her new apartment. If you ask her what she thinks of the East end area she calls home, she’ll smile wide as she tells you about the community she’s grown into.

“It’s like a little village,” says Gibeault. “It feels very senior friendly and you can walk pretty well anywhere. There’s a park just a block away that I spend a lot of time at when I’m out walking. I think most of the seniors who live in this area feel that connection to the community.”

That community connection grew when the Abbotsfield Youth Project approached the Beverly Lodge with GEF Seniors Housing and the connected Porta Place apartments to be part of Love Grows Here. The initiative sees elementary school aged kids from the North East Edmonton communities work with seniors on an art project that expresses what they think about their neighbourhood. Rebecca Prentice, another tenant with Porta Place apartments who took part in Love Grows Here, explains that having the opportunity to interact with the kids brought a whole different energy to her day. “There were barely any quiet moments while we were all working together,” says Prentice. “We were constantly talking and throwing around ideas and trying different things. In the end, all of the ideas came together.”

The final project that came together was a tree with a different kind of artwork on each branch. The kids each painted something that represented what they thought of their neighbourhood. Some of the seniors were nervous about trying their artistic skills, so they used a little bit of creative ingenuity to express themselves.

“I found some old magazines and clipped out the pictures and I painted around that,” says Prentice. “We all did something different to express what the Beverly neighbourhood means to us.” Jean Charchuk, who lives in Beverly Lodge, wrote a poem that reflects her regular walks through the neighbourhood. She explains that she had cousins who lived in the area while she was growing up, so she always had a connection to the neighbourhood. “I’ll walk through Beverly, into Rundle Park, and down to the river,” says Charchuk. “I see a lot of things when I take these walks.”

Audrey Weir, who also lives at Porta Place apartments, painted trees and a long roadway. “It’s a memory from walking along Ada Boulevard,” says Weir, who moved into Edmonton’s North East corner in the mid-1950s. “I remembered how the trees hung over the road.”

One of the most surprising things the ladies learned was how interesting they found the kids. The mix of generations helped everyone involved learn to appreciate each other more, learning that everyone has something to give. Prentice fondly remembers the ice-breaker game they played when they all first met. They each had to put a fact about themselves into a hat, then the facilitator would draw each fact one by one and the room has to guess who the fact belonged to. After the five sessions, the final art piece was unveiled at the Abbotsfield Youth Project Society office on December 1, 2016. Since then, the piece has moved around to some of the schools in the area, to the Suncor offices (who sponsored the project), and is set to arrive back to Beverly Lodge later in 2017.

For Weir, as much as she loved creating for the final piece, she found that watching the kids create to be most intriguing. She says that to see the kids put a glob of paint on their brushes and stare off into space as they created something was really fascinating. “I have grandkids and I’ll sometimes just sit back and watch and listen,” says Weir. “That’s when you get to see them for the people they are. I did the same with the kids while they painted and that was fun.”

Charchuk explains that she gravitated towards one of the older boys taking part in the project. She says that she noticed he was quiet and seemed to be almost daydreaming, which reminded her of herself at that same age. As the two connected, she learned how artistically talented he was and it helped to inspire her.

“I watched him draw and I remember thinking that he can really translate what he has in his head onto the canvas,” Charchuk says. “After the project, he and some of the other kids wrote me a letter to say thank you and I cried while I read it. It was such a nice letter and it meant so much to me.”