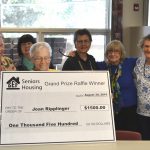 “There’s nothing better than making that call to tell someone they won a pretty significant prize,” says Chris Schieman, Public Relations Manager with GEF Seniors Housing. Schieman, along with the rest of the Communications team, take charge of GEF Seniors Housing’s fundraising initiatives, including the ever popular Building for Life Breakfast Fundraiser.

Schieman goes on to explain that most people contribute to the raffle, “not even thinking about the prizes. Every call that I’ve made telling someone they won a prize, they always respond saying they weren’t expecting anything. They just wanted to give something back.” Last year’s early bird prize winner was Juvy Santos, a friend of the staff working at Cathedral Close. Santos stopped by GEF Seniors Housing’s Central Services to pick up her cheque and posed for a few photos.

“I remember [Joan] Ripplinger telling me about how she and the other tenants at Britannia Gardens all get together to buy raffle tickets,” recalls Schieman. “It’s something that many people find a lot of fun and they can take part knowing the money raised is going to a good place.” Tickets for the Building for Life Raffle are only two dollars each, which helps make taking part more accessible for everyone. Efforts from 2016’s raffle brought in close to $7,000 for the Sakaw Terrace building project.

With tickets for the raffle going on sale starting June 1, 2017, and available to purchase at any of GEF Seniors Housing’s buildings or at Central Services (14220 109 Ave, Edmonton, AB.), Schieman is excited to see what this year’s raffle will bring in. As he explains, every year the raffle can be a little bit unpredictable.

“We’ve had years where the winners donate back the prizes, we’ve had tickets completely sell out at some of the buildings, and we’ve even seen individuals spend hundreds of dollars on tickets with no expectation for winning,” Schieman says. “You give people an opportunity to contribute to something they believe in, and they will take full advantage to contribute. In the end, everyone who takes part in this raffle believes in our mission and wants to help us push forward so that no senior ever has to worry about where they’re going to call home.”