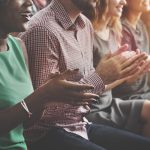 Every month, ATB Financial holds ATB Culture Day for the newest members of its staff. The event is hosted by Lorne Rubis, ATB’s Chief Evangelist, and is meant to show the newest members of ATB’s staff what they as an organization value. For a bank, it’s easy to assume the values would start and end at money and maybe include something about customer service and value as a means to make money. But, throughout the event, the tone felt less like corporate onboarding and more like philanthropic motivational speaking.

ATB Financial is often named one of the best organizations to work with in Canada and frequently appears on the same best employer lists as GEF Seniors Housing. After spending a day at the event that is meant to instil the organizational values into the new employees, it’s easy to see why the $50 billion company with more than 5,000 staff sees more than 50,000 resumes come through its doors annually.

“A small group from GEF Seniors Housing’s Management team were invited to sit in on ATB’s Culture Day to see where its orientation differs from our own,” says GEF Seniors Housing’s Director of Human Resources Tracy MacLeod. “The minute we walked into the conference space, we could feel the energy in the room. It was obvious that we were about to witness something truly unique.”

The day saw presentations from ATB Financial’s CEO Dave Mowat, Senior VP of Reputation and Brand Peggy Garritty, and CFO and Head of Operations Bob McGee. They each went through a list of what’s called the ten ATBs, which is the overarching list of values that ATB Financial as an organization lives by. In general terms, the list of values that make up the ten ATBs range from accountability to outreach and even having fun. What’s striking about the list of ten ATBs is how much empowerment it gives back to the employees and how it encourages all employees to not even necessarily do what’s best for the company’s bottom line, but do what’s best for the people they interact with whether they be customers, fellow staff members, or people in the community they encounter. “Between each session, we moved tables and were encouraged to sit with people we hadn’t sat with before,” MacLeod recalls. “At every one of the tables I sat at, everyone had a story to share about something they did or they witnessed about going above and beyond for other people. It made me realize that when they talk about valuing people, they genuinely live those values.”

On the surface, it would seem odd that members of GEF Seniors Housing’s staff would attend a major staff orientation event for another organization. For MacLeod, it’s an opportunity to learn and grow and see what else the Human Resources and Seniors Management teams can do for the staff at GEF Seniors Housing. As MacLeod explains, there’s always room for growth and improvement and the minute you stop looking for those opportunities, you’re doing a great disservice to the amazing staff that make up GEF Seniors Housing.

“ATB’s Culture Day left such a strong impression on me, I knew I had to bring what I saw back to the staff at GEF Seniors Housing,” says MacLeod. “The amount of care and investment that ATB’s staff showed is the same that I see in our own staff. I want to share that impression that was left on me with our staff to help us remain one of the best places to work in Canada.”