Mixed Market Housing – What does it mean? 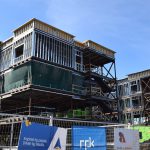 A term that’s being used a lot during conversations about Sakaw Terrace is “mixed market housing.” What this term actually means could change a lot about how affordable housing projects are approached in Edmonton. GEF Seniors Housing CEO Raymond Swonek first encountered this idea while touring around different affordable housing buildings in England.

“This model of housing is actually fairly common in England, and there’s a good reason why,” says Swonek. “The housing organizations in England are some of the most stable and well-functioning I’ve ever seen and a lot of that comes from implementing this housing model.” For Sakaw Terrace, the mixed market housing will see 70 per cent of suites be designated for seniors living on a low- to moderate-income and pricing will be based either on the seniors’ income or set at 15 per cent below market value, like at Ottewell Terrace. The other 30 per cent of suites will be priced at a market value and will be available to any senior.

Where the benefit of this housing mix comes in is that the money from the 30 per cent of market value suites then goes back into the operations of Sakaw Terrace entirely, making it more financially sustainable and less dependent on public funding. The money GEF Seniors Housing is generating by using this model can then be reinvested into other parts of the organization for the benefit of the seniors. The mixed market housing approach has proven so successful in case studies from other parts of the world that the Province of Alberta actually included it as staple part of its major housing strategy in 2017. For Swonek, this is a strong sign that his vision for the future of GEF Seniors Housing is headed in the right direction.

“Some of the housing organizations I’ve seen implement a mixed market housing approach have generated surpluses that they’ve been able to invest back into their organizations,” says Swonek. “The fact that the Province of Alberta has included this approach to affordable housing in its housing strategy shows that it sees what I’ve seen and it’s willing to try something that’s never been done before in Alberta.” Once Sakaw Terrace opens its doors in 2018, it will be the first affordable seniors housing building in Alberta to implement the mixed market housing approach. With full confidence in this housing model, Swonek is already discussing how it will look in the future Elmwood project.

“This is what the future of affordable housing looks like and is the best and most sustainable approach to seeing more people helped with the affordable housing options that they so desperately need,” says Swonek. “I have no doubts that Sakaw Terrace’s implementation of mixed market housing will be a huge success and set a new standard for affordable housing in Alberta.”